Foreign investors would like to see the newly elected President of Ukraine demonstrate effective anti-corruption efforts, appoint credible reformers to key positions, and separate politics and business interests by reducing the influence of oligarchs.

These are the findings of a new survey of strategic and portfolio investors which was jointly conducted by the European Business Association (EBA), Dragon Capital, and Center for Economic Strategy (CES) in April 2019.

At the same time, a shift in Ukraine’s geopolitical direction away from the West, steps to undermine the existing anti-corruption framework, and attempts to infringe on the central bank’s independence during the new President’s first 3-6 months in office would have the most negative impact on investment and business decisions.

An overwhelming majority of the surveyed investors, or 88%, are interested in investing in Ukraine, but most of them, or 68% of total respondents, prefer to wait until after the parliamentary elections and formation of a new government. 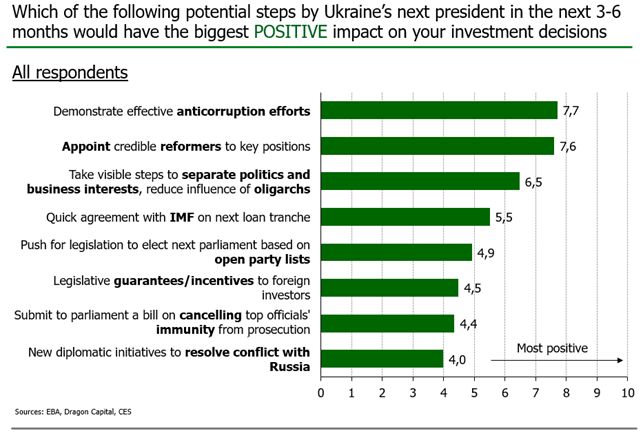 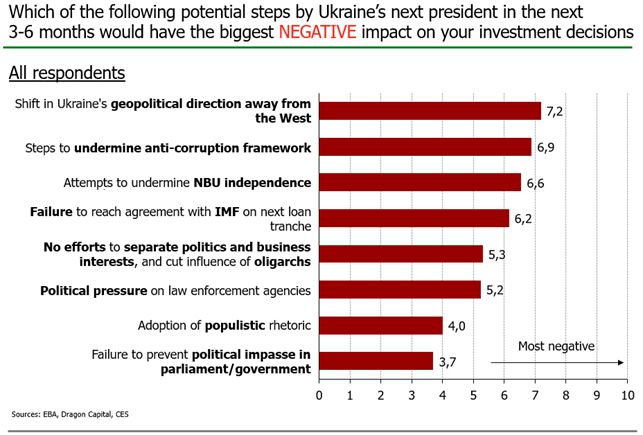 Widespread corruption and low trust in judiciary remained the biggest obstacles to investment in Ukrainian assets for the fourth consecutive year. Market monopolies and state capture by oligarchs add to the negative perception of Ukraine’s investment attractiveness. “Unstable financial system and currency”, previously among the top-3 hurdles, sank to sixth place. The military conflict with Russia remains a significant obstacle, as well as “oppressive law enforcement agencies”, which rose from seventh to fifth place.

"Results of the survey show that investors’ demands and requests remain just the same - establishment of the rule of law, fight against corruption, honest and equal “game rules”. Business requires balanced state decisions, smart actions and appointments, as well as continuation and strengthening of transformational processes. Yes, we see certain changes, but we need to reload the system. The first steps for the newly elected President are those shifts that the country needs. Business is ready to contribute, but the state must become the locomotive of change", said Anna Derevyanko, Executive Director, European Business Association.

Tomas Fiala, CEO of Dragon Capital and President of the European Business Association, said: “Both external and domestic investments in Ukraine are very low, totaling 1.2% and 17% of GDP, respectively, which puts the brakes on economic growth and keeps Ukraine lagging behind its western neighbors. We hope that the new President and Verkhovna Rada will direct their energies, first of all, towards establishing the rule of law, fighting corruption, and reducing the influence of oligarchs."

"Ukrainian citizens and investors alike hope that the new president will work towards overcoming corruption and sidelining the oligarchs," said Hlib Vyshlinsky, executive director of the Center for Economic Strategy.

The survey was conducted by the European Business Association (EBA) and investment bank Dragon Capital with analytical support from Centre for Economic Strategy between April 15-19, 2019. A total of 75 respondents, including portfolio and direct investors and those already invested or planning to invest in Ukraine, participated in the online survey. The survey was conducted in the form of an online interview with the help of Info Sapiens.

The European Business Association (EBA) is one of the largest business communities in Ukraine, founded with the support of the European Commission in 1999. The EBA gives domestic companies the opportunity to contribute to improving the investment climate in Ukraine in favor of business industries, society, and the country as a whole.

Dragon Capital is a leading Ukrainian group of companies in the field of investment and financial services, offering a comprehensive range of products in equities and fixed income sales, trading and research, investment banking, private equity and asset management to corporate and private clients.

Centre for Economic Strategy (CES) is an independent economic policy think tank founded in May 2015. Its objective is to support reforms helping to achieve sustainable inclusive economic growth in the country. The Centre contributes to the development of Ukraine's economic growth strategy, conducts independent analyses of the most important aspects of public policy and builds public support for reforms.

Dragon Capital has completed the acquisition of a 1,795 m2 office building in Kyiv from Alfa-Bank.
© 2000-2019 Dragon Capital
Frontmen Agency